Now we’re digging in to some of the actual mechanics that make a business work – I love this stuff! Let’s dive in.

I’m going to start broad here and then zero in on the answer because if I do it that way it will make more and more sense as we go through the options.

I’m going to share the best way I believe you can get started in business and I want to explain where I am coming from with this.

So okay, that might sound like a really obvious statement. But actually it’s not, because the media pedals us the opposite idea – that only the chosen few succeed.

In the media the founders of venture-backed startups are idolised. We want to be the one who is chosen and for other people to give us money to invest in making our amazing new idea reality.

I believe though this isn’t the best choice for most people. To start with 98% of people who apply for venture capital will be rejected. Take that in for a moment. 98% get a no before getting any further and those are the ones who took the time to apply.

AND most of those types of businesses fail – About 75% of U.S. venture-backed start-ups fail, according to Harvard Business School senior lecturer Shikhar Ghosh. The failure rate Ghosh reported to the Wall Street Journal is far higher than industry reported failure rates.

And worse still what do you get when you use someone else’s money – someone to answer to.

And that in general is what we want to get away from. Plus you can’t really be location-independent if you have to go to the office. Right?

Which is nice if that really is you, but let’s face it, it likely isn’t and who wants that anyway?

So if we aren’t using someone else’s money – we have to shock horror – use our own! Or actually better still hardly spend anything before bringing money in.

So let’s look at the next big decision – physical product or service?

I think you are better off going with some kind of service/info product, rather than a physical product. Physical products can be appealing but they come with additional complexity – manufacture, shipping, storage, raw materials.

Plus if you are selling a thing, and this is definitely the case with drop shipping, price competition is much stronger than in the service-based industry where people will pay a premium for expertise or for the person involved.

So given that you want to start making money as soon as possible and you want to reduce complexity I would argue you want to go with a service.

Okay, so now we’re at a place where you may be thinking – what kind of service?

Do you mean like coaching or consulting or web design, or being a virtual assistant – yes, that’s what I mean. Either consulting in some form or getting some work done for other people. There are so many different things you could do here and we’ll dive into business ideas and niches in upcoming episodes.

I know that you’re thinking at this point – But what if I want to earn money while I sleep?

Believe me you can – but we are looking for the best business model for new online entrepreneurs. So maybe it’s not actually the best choice at first.

What do new entrepreneurs need – they need income, quickly and with minimal preparation. 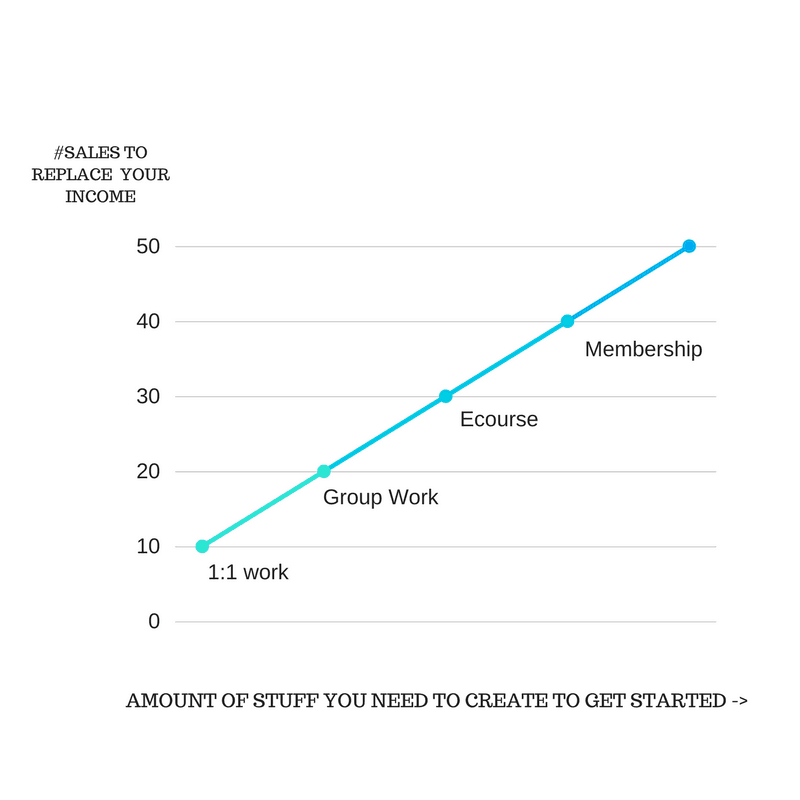 So what that means is the more leveraged something is the less each unit costs and the more people you have to find to sell it to.

And if you are new you likely don’t have a huge audience to sell to yet.

Yes, you could try and create an audience but that takes either time or money, both of which you are trying to use the least of when you start. you could m

Sooo you are in a situation where you want to have to make the least sales to make the most money, with the least lead time to get your business off the ground, replace your income and be able to quit your job.

You don’t want to spend a year finding 100 people to sell an ecourse to make $20k and spend 3 months building it when you could start coaching in the next few weeks and make that in a third of the time AND work less.

And what is incredibly convenient about doing 1:1 is it’s usually well paid AND you don’t have to bust your balls for months creating videos and workbooks because you can. Just. Start.

So I recommend you start your new online business with some kind of coaching, consulting or 1:1 service:

• No needing to borrow other people’s money.
• No dealing with physical products
• No months building an ecourse without really knowing if you have the people to sell it to yet.
• You can just start.

Plus on top of it being super easy to start (other than getting over your own fear) is you get to make money while you grow your audience and reputation and get referrals.

Then once you have a bigger audience and too many people to work with 1:1 you can move up the leverage ladder and do group work, or then create a ecourse and your ecourse will be 100x better from you gaining the experience with 1:1 too. Plus then you’ll have the marketing expertise and audience to sell it.

That’s my recommendation – start with 1:1. As potentially unsexy as it sounds around 99% of the people that you admire online started that way too because it works.

← The Online Business Growth Ladder – Your JourneyThe Money Three – What Are The Three Things We Need To Make Money In Business? →